in Civil and Building Construction 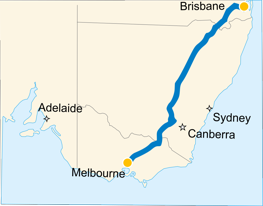 Inland Rail, a project that will create an estimated 16,000 jobs both directly and indirectly in regional Victoria, New South Wales and Queensland, is set to begin work in the middle of the year, beginning with the Parkes to Narromine section.

The entire project will require 262,000 tonnes of steel, to be supplied by Liberty OneSteel Whyalla Steelworks. They have already delivered 14,000 tonnes for the Parkes to Narromine section. Darren Chester, Minister for Infrastructure and Transport, has said that the amount of steel required for the project is,

As a whole, once the project is completed, Inland Rail will cut the freight time between Tottenham, Victoria and Acacia Ridge, Queensland by ten hours, effectively allowing the trip to be completed within a twenty-four hour period.

P2N is the first of 13 sections of work that will begin mid-2018, with the contractor to be selected in April this year.

Some of the works for this section include:

The second section of Inland Rail that according to reports has been priorities, will be the Narrabri to North Star (N2NS). Both the P2N and the N2NS have been declared ‘State Significant Infrastructure (SSI) back in 2016 by the Department of Planning and Environment.

The eleven other sections of the project are undergoing concept design, with the first trip on Inland Rail to be made sometime between 2024 and 2025.

Are you an engineer with a passion for rail projects? Or simply interested in hearing more about Australia’s Civil Projects? Get in touch with us today!

For more information on the project, click the link – https://inlandrail.artc.com.au/